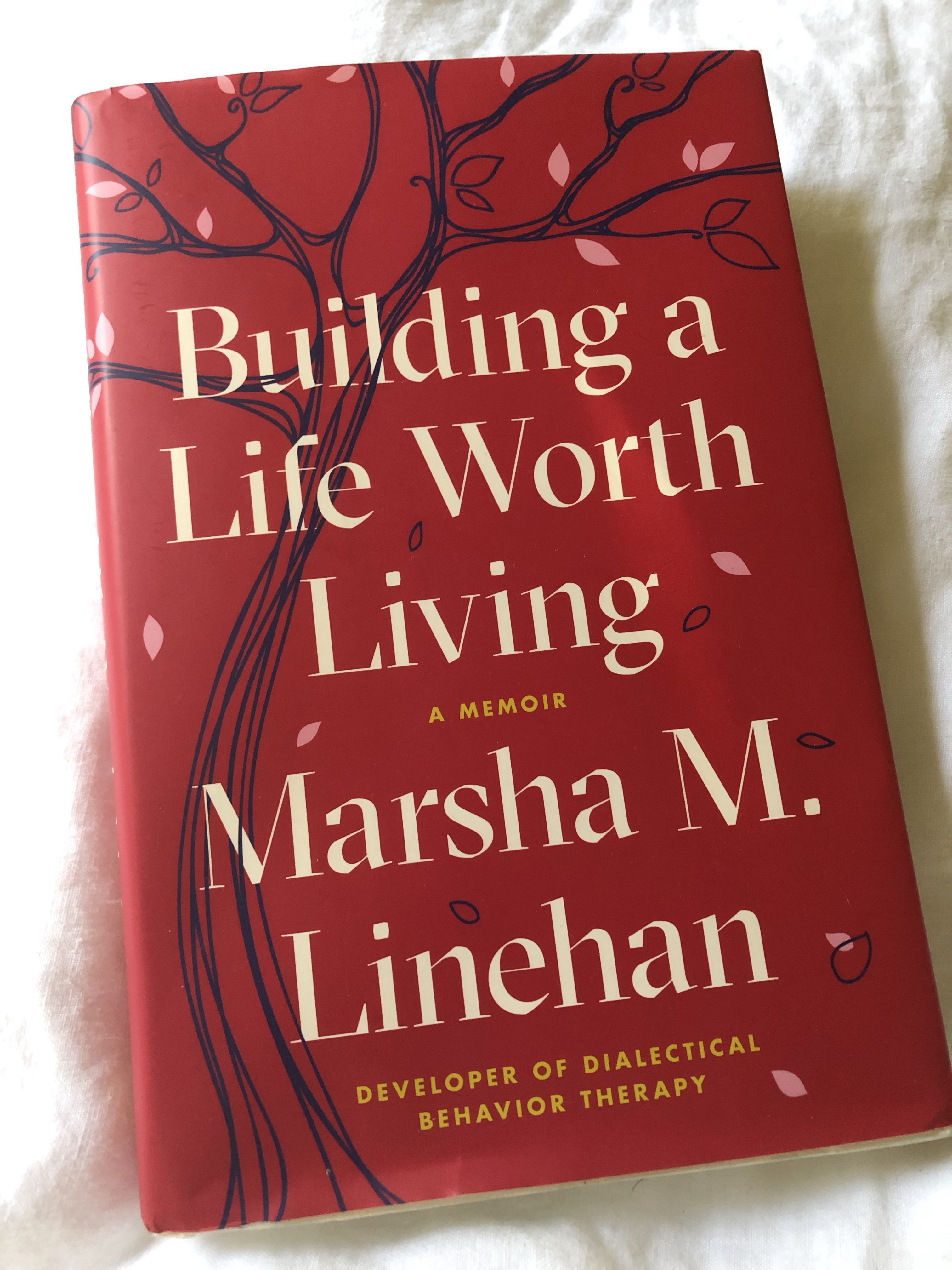 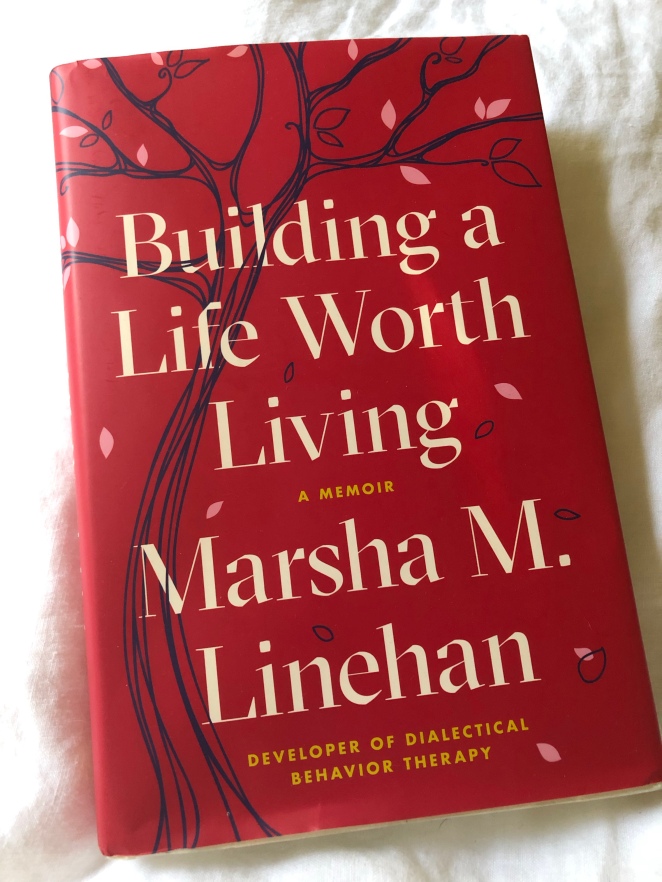 How do we build a life worth living?

Professor of behavioral psychiatry and director of Research and Therapy at the University of Washington in Seattle, Marsha Linehan is the founder of a clinical intervention called Dialectical Behavior Therapy, or DBT; a tool that has helped many people hammer their way out of hell, including Marsha.

Building a Life Worth Living, her debut memoir, unifies the personal and the professional, something that until very recently has been considered virtually unthinkable. For reasons I’ve yet to fully understand myself, professional helpers haven’t been thought of as human beings. Marsha is part of an emerging group called providers with lived experience. Google trauma-informed care and the ACE’s study for the full scoop. I’m honestly too tired to explain it. That’s my day job. At night, when I blog on my couch with my dog snoring in my lap, I get to be me; a survivor of complex trauma and poverty who’s beyond exhausted and was ready to retire two decades ago. Unlike Marsha, I haven’t invented anything special, don’t have the option of taking a sabbatical to live in a meditation monastery and become a zen master and no one’s leaving me a bucket of money to buy a cottage on an island. I love you Marsha, just being real.

Her clients say it best:

“When she got to the point of revelation, I was completely astonished…That she was one of us. Her story was so sad…she had to keep quiet about it for so long, because it would’ve ruined her career if she’d spoken up…but it’s also, as she said, a message of hope for all of us.”

In addition to being a celebrated expert, Marsha was hospitalized for two years and one month at the Institute of Living; though her description of the experience hardly reflects the name of the place. This was back in the dark ages of psychiatry when such facilities were all we had to offer those in need of a safe, healing harbor. Sadly, enlightened palaces of restoration still don’t exist. People are just waking up and for many, the alarm is jarring. Back in the good ol’ days it was easier to think some people are bad, crazy, lazy and others are good, right and righteous. We need to offer ourselves compassion for what we didn’t know yesterday.

Maybe sanctuary does exist but not we’re not all ready to go there. Those of us who are, are forced to wedge slivers of self-care into merciless schedules of survival, rank and file. Stay in your lane.

I cringed hearing her descriptions of being over medicated, insulted by nurses, secluded as punishment for behaviors that were clearly cries for help; being wrapped in freezing sheets on a metal slab when what she probably needed was a warm hug.

While some of the treatment she received, she describes as being clinically validated, life saving and helpful, including a doctor with whom she had a long term, potentially questionable relationship, as a therapist who’s worked on a psych unit within the last decade, I’m grateful for the advances we have made. And I still dream of a humane society that offers the kind of integrated treatment and mentorship Marsha eventually found. I wish she hadn’t had to work so hard to find it. If we pay close attention to her story, we could speed things up for the next generation.

Throughout the book she wrestles with chronic feelings of worthlessness, self-rejection, emptiness, disconnection, longing, urges to cut, suicidal ideation, anxiety, deep religious afflictions and depression which frequently bordered on existential nihilism. Alongside her suffering, she humbly reveals an indescribably bright mind, emotionally resilient heart and spiritual light. Honestly, what’s not to love about this brilliantly multidimensional woman?

Her fear, however, one which is shared by many of us in and out of the field, was: If they find out who I really am, I’ll be stripped of my worth all over again. I’ll never be loved.

Sometimes the profession feels like a straight-jacket. We might have the answers but our hands are literally tied.

Most of the time I don’t know what I’m allowed to say or not say; tip toeing across the human landscape of eggshells and all the other broken things.

Reading the book explains a lot. Without giving it all away, being unloved shattered her heart into a thousand pieces but instead of dying, her pain broke her open and the truth came out, when it was time. Apparently, the time is now. Are we finally allowed to breathe?

As mental health professionals, why aren’t we leading the way in the destigmatization of mental illness?

Marsha first revealed her battle with mental illness in an interview with New York Times in 2011. She talked about why it took her so long to explain the scars on her arms from years of cutting and burning herself. While no one owes the world an explanation, therapists are trained into sacred silence. Clinical experts have strict rules when it comes to what we can and can’t do, say, think, feel or state for the record. We can lose everything for being human which is probably why most of the time no one understands what the hell we’re talking about. We become verbose recluses, our jaws wired shut by everything we know but are forbid to say; talk about parallel process. We spend our careers buried under secrets, hidden behind closed doors.

We can’t acknowledge our clients in public, can’t panic in a crisis like a normal person (someone has to remain calm, right?). We aren’t supposed to psychoanalyze our family at parties (but we probably do), can’t be seen anywhere other than a bookstore or a preferably non-denominational church and also should be covered from our chin to our ankles in a dark burlap sack so as not provoke inappropriate feelings in those we treat. If we happen to have a mutual friend in connection to a client and discover we may be attending, let’s say, the same wedding, we’re required by law to arrange for the comfort and wellbeing of our client prior to the event, (never mind the bride! Unless she’s the client in which case…call your supervisor who can help you strategize the best way to politely decline the invitation while preserving the therapeutic alliance.) Long story short, seeing your therapist do the Chicken Dance could potentially add to your already long list of traumas. We took an oath: Do no harm…to the client but we’ve got broad shoulders. Buck up buttercup.

Are we perpetuating codependence by pretending everything’s fine?

Marsha’s coming out continues to inspire my own epiphany; you know, where you gurgle out a death rattle, choke on your own bullshit and eventually cough up the truth? Until she came out as a clinical expert with lived experience of trauma and mental illness, all we had was Freud and Jung; two mad scientists who probably did coke and might’ve slept with a mutual patient, a clinical sin, but since they were guys and it’s ancient history, who cares? We still don’t really prosecute sex offenders. Especially not rich white guys.

I finished the book a month ago, devouring it in two weekends. Part of the reason it’s taken me this long to scratch out a review is because I still think nothing I do will ever be good enough. That and I’m re-writing my own story, also my day job occasionally leaves me catatonic. I’d clarify but it’s against the rules of the field, which parallel the rules in all dysfunctional families: Shhhhhhh…

Recovery communities say, we’re only as sick as our secrets. If that’s true we’ve got much bigger fish to fry than the Corona virus.

How do we build a life worth living?

No matter who we are, facing and owning our truth seems to be the best place to begin. When we move through the shame, pain, fear and terrifying illusions, we unearth superpowers we didn’t know we had; retrieving torches that light the way for others who are clawing at cave walls in the dark.

A wise friend of mine said it best when I recently called to ask for her for advice: Align to Shine.

I’ve heard it before but this time, it made sense.

My devotion this morning was Freedom: The truth will set you free.

Every time we pretend to be anyone other than who we are, a little part of us dies. For years I attempted to hide the fact that I’m a survivor of complex trauma, an eating disorder, codependence and poverty. Coming out with my story continues to offer me the freedom and peace I’d previously tried to find by pretending to be someone I’m not.

Maybe you’ll hear a different message if you decide to read this book (which I highly recommend), but what I heard was, in order to build a life worth living, start with a foundation of truth.

“Don’t believe that those who seek to comfort you live untroubled among the simple and quiet words that sometimes do you good. Their life has had much difficulty and sadness… Were it otherwise they would have never been able to find those words.”-Rainer Maria Rilke

So, ps: This book was great and I hope it changes the world. Also, I miss you. I miss blogging and free time, painting, warm weather (I’m the color of paste). I miss being 5, when it was good. Back in the day I could eat an entire American cheese stuffed omelette, hash browns and like three bowls of cereal and still not fill out a pair of pants. Ok fine, I’m currently not awesome at filling out pants but I’m on a boring food plan that doesn’t include Frosted Flakes. Eating disorders suck.

Fun news? I’m working with someone who’s helping with the book and it‘s changing my life! She’s funny, wise, hard working, brutally honest and kind at the same time. She’s teaching me exactly what I need to do to get where I’ve always wanted to go. I almost believe, if Marsha can do it, so can I. I’ve never once doubted you. I hope we all get there. xo