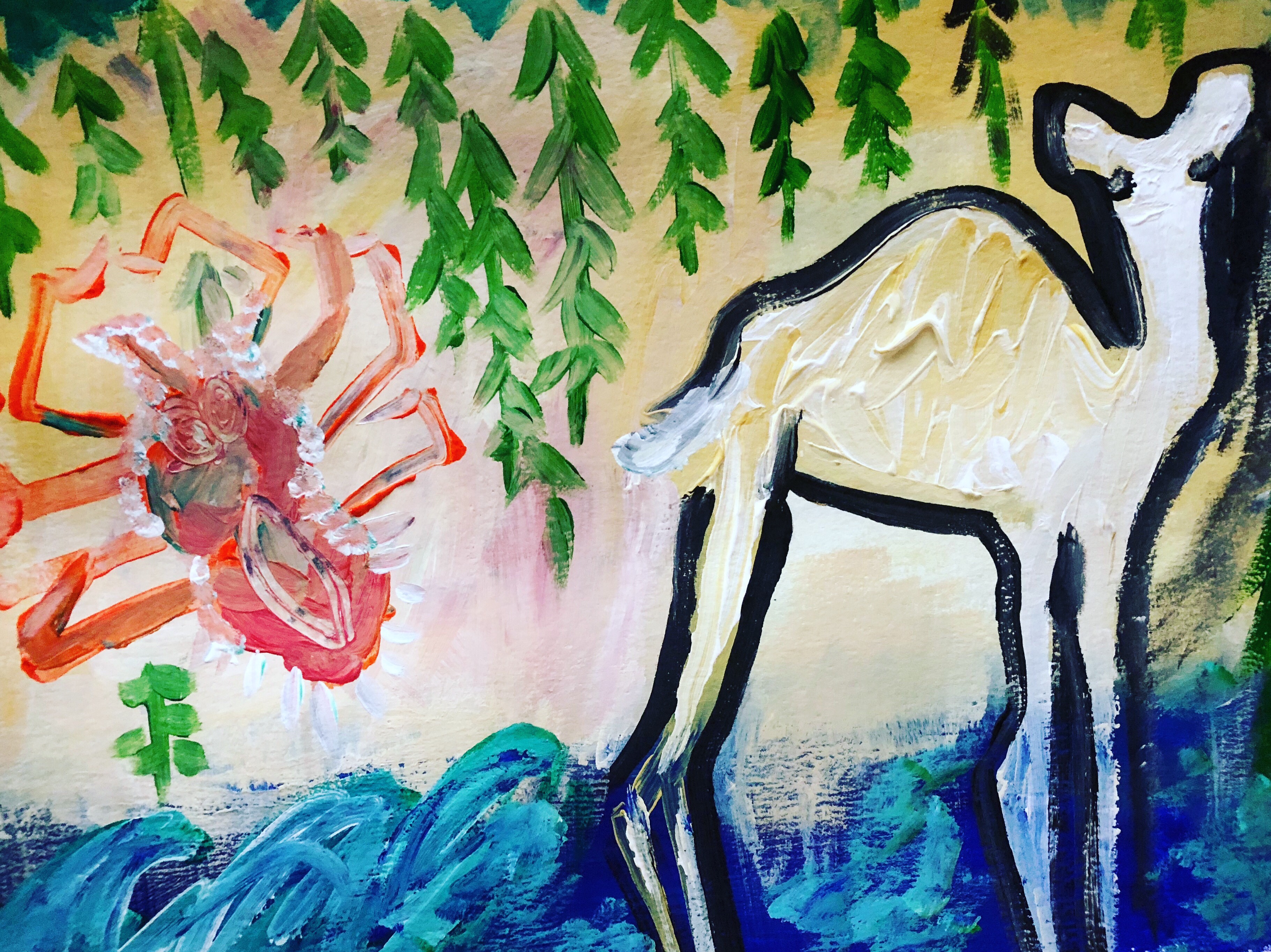 The Camel and the Scorpion 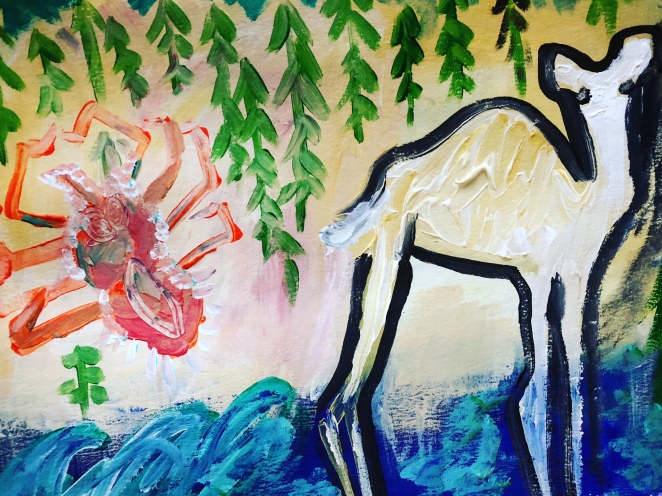 We’ve been home two days. Dreaming resumed after stuffing our faces with centuries old art created by either the typical, deviant aristocracy, those men who had the choice to forgo their family’s pursuit of traditional wealth in favor of  living abroad with unsanctioned partners painting en plein air, feigning a pauper’s life to master the illusion of a breeze blowing through trees or the works of indigenous people whose craft became marketable, trendy, avant-garde long after their sacred ceremonies died along with them. Regardless, I loved the escape from our wonder white bread town. It’s safe, insular, predictable, giving me the time and permission I crave to think, sleep, dream and be anything other than fuelish fodder.

The camel was young, maybe twenty, like an excitable frat boy scampering around an apartment off Park Place across from the diaper mountain. He, along with his owner, wanted to go out for the night. His handlers attempted to force me out of an introverted cage to offer him the scripted rite of passage; two drinks and dancing to the monotonous beats of a hack d.j when I could be at home curled up in bed with a good book and clean shirt. His rangy body took up more space than we could afford, smashing sheet rock, tearing down door frames and stamping unintentional holes in the laminate flooring. In spite of his hopeless lack of self awareness I pathetically, loved him while simultaneously feeling aware of fatigue for life in general. I’m old enough to know better yet kept wondering why he’d shown up. Why were these strangers insisting I join them in laughing at our wild beast of a roommate? Desperate for bread crumbs I thought it could mean something yet deep inside I knew this was, entertaining as it may be, absolutely nothing new. Why? Because I’ve been here a thousand times, responsible for keeping the lights on, watching your front and back, guarding the window, the shadows, listening for gunshots, keeping your enemies at bay.  Are you planning to do his laundry? Clean up his mess? Go to work in the morning to pay for all this shit? Frolicking is for children. I’ve never had the time.

After babysitting the zoo came scenes from the office and a dreadful public school conjuring memories of cold, painful nausea; bleeding and vomiting alone on a cot in the dark while some crotchety, old and senseless nurse sends you back to class pale in ruined jeans. All the teacher had to say was you were a bump on a log today. Apologies for failing to impress you while my uterus was imploding. I promise to be more entertaining tomorrow. Public schools for poor kids are lit with lime florescent lights, sparsely filled with hard furniture and refuse to ever be warm; like ashtrays in the snow under street lamps. Even the youngest faces look haggard in those bathroom mirrors; stray hairs and the ghost of the real person you might’ve been had someone truly loved you. Like always, I was planning, since the city was under evacuation warning and everyone else was dissolved in helpless panic. Dancing off to the left this time was a larger than life scorpion; Scorpio. Are you my father, sister, brother, unfriendly, unknown friend mocking my existence and attempts to be anything other than your sacrificial helpmate? Useless women fretted over nonsense, stirring up impossibly dramatic scenarios in which each one out-sorrowed the other to escape viable accountability. If these plans fail at least it won’t be my fault. Their unattended children took up sticks and shards of broken glass creating micro-reenactments of what they’d begun to learn under the instruction of fear. Ignorance gains none of us nothing. Set to the left and right corners of Lifetime were two men, each with distinct tactics of avoidance; a camera and blindness. Claiming to have once loved me they stared peripherally; one hoping I would see him, the other hoping I would see him seeing me hoping in turn I’d eventually see him. Before drowning in ethical torment the Scorpion appeared; electric orange, he stood on hind quarters, fanning his pointers like a peacock. Gimme a break! Geezuschrist. Subject, crush, kill me if you must but enough of all this. I have a plan and you’re not it. He scuttled into the shadows of the hostile room while I took off barefoot in a sundress, just like the day they kicked me out. Has anyone ever been there in full, reliable support; the kind you can thoughtlessly lean on? Rest in peace. Maybe fairy tales begin with funerals for a reason. We’re all orphans of a twisted god testing our mettle? Once in a city alley he recited those song lyrics to me. I want to take someone for granted; it’s the highest compliment, greatest insult and probably what we long for most. Well, mercy.

I walked along a cresting beach swarming with self-righteous surfers proclaiming unapologetic entitlement to the mountains at their disposal across the street; as if life owed them this luxury. After getting their fill of riding the sea they planned on plowing the snow covered peaks, carving thoughtless groves in her soft body; anything to prove their planetary mastery. Sympathizing with the waves I hiked the incline towards a safe height past more unwanted, untethered, feral children whose bearers gorged on buckets of genetically modified wings. They spoke at each other across shiny banners of Americana which encircled their camps like capes of lying honor. World champions of murder, oppression, genocide and infantilized exploitation. Kings and Queens of pain. You must be so proud. Vertically trudging in search of compassion, thirsting for authentic versions of every cheap thing they settled for I landed on a converted van inhabited by a single mom and her partially rejected kids. She offered me a sealed place to sleep for the night. I feared we’d run out oxygen. With my index finger I opened a tiny porthole on my side, hoping this would be enough for all of us. He was in the front seat, one eye adjusting his lens, the other telepathically stating all things unsaid, undone actions he couldn’t bare to take; frozen between Passenger, driver, the past and console. Console. No one has, should or could save but One. A bother from the get go in flesh and blood; living life as a burden, in spite of not wanting to be spiteful. Suppressing urges to eat with both hands, consume until fullness every unspoiled harvest in lieu of chronic hunger which we favor to avoid the poisonous sting of the ultimate trick; it’s just a dream.

11 thoughts on “The Camel and the Scorpion”