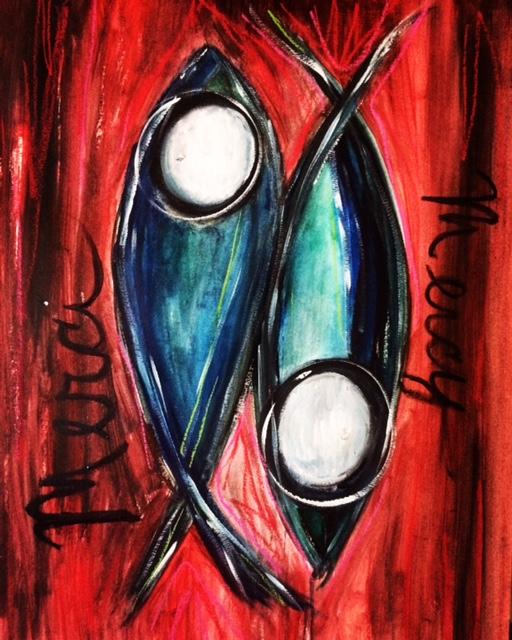 Two sides of the same prayer

This morning I woke up and went back down. As if to counter what I wanted to judge as apathy, my 75 pound dog climbed up and laid on my chest. Stay. So for an hour and a half we practiced surrender to guided meditations. Maybe I’m fine and all the work is done? If that’s true your solar plexus would’ve stopped nagging you by now. Maybe I’m burnt out and just needed to do nothing? If that were true you wouldn’t be questioning dreams, praying for guidance or wrestling with restlessness. Maybe I should just be content and settle into the good, dog, god is love that’s right here heaving on top of your heart? If that’s true you wouldn’t be having imaginary conversations with Oprah about how many prisoners a billion dollars could free; and not just in the literal sense. Maybe you think too much? Maybe you’re already where you thought you wanted to be? Maybe you’re not dreaming big enough? Too big? Shut up! Maybe you just need to do something. Maybe, but what?

So I called the energy healer and left a message; some guy who worked for a big plane company. His heart told him it was time to come down and help the rest of us find our wings. I’ve learned to suspend expectation and remain curious instead, which is different from refusing to have any hopes at all for fear of being disappointed. Like telling your life story to two total strangers who interpret you in paragraphs and pictures you barely recognize; the experience, while beautiful, humbling, left me someplace between paralysis and freedom. I think they call it purgatory? Was all that really me? It feels like I dove off the Yucatan Peninsula and now I’m bobbing in the Gulf of Mexico staring blankly at the sky. People have said kind things, extended invitations to share or do more, which might be part of the hesitation. Before I could figure out what was next I had to figure out what the dreams meant; haunted by trauma. The first weekend we walked around the house singing the Ghostbuster’s theme song. I ain’t afraid a no ghosts. In truth it either felt like a sentence or a lie I’d need to find the gumption to challenge. In agreeing to do the interview I stressed my intent has always been to restore hope and the belief that we can heal from hell no matter how hellish it was. It was one of those lucid dreams where the images paralleled reality; voices, objects, clothing, weather all reflecting waking life, except for the vintage leather suitcase and a large vacuum cleaner which we don’t own, blocking the exit to the room. My husband declared there was a presence in the house, which I could hear rumbling its way up the stairs. I woke up screaming god. Maybe this energy guy is the human Hoover who can sweep out any lingering dust from the past. I’d rather wash windows.

A few nights ago in the midst of a much needed staycation I dreampt of a manatee. Swimming out of his ocean, conveniently planted downtown, he began telling me it was my job to clean up his environment. He listed toxins like interpersonal conflict, social unrest and everything my husband yells at me for not recycling. In disbelief I turned to strangers asking if manatees could really talk, which they casually confirmed as if I were the last human alive to know about this phenomenon. Why is he asking me? Is the task mine or his? Believing we’re powerless might be a comfortable preference to exploring the unscripted, vastly infinite and untapped possibilities waiting to hatch inside each of us. If it weren’t for a food plan I might never get around to choosing breakfast; a decision that was once made easier because of gymnastics. The commercials had many of us convinced if we helped ourselves to a bowl of Wheaties we too could propel across the universe in symmetrical rotations. I had to find out if the ads were true.

The balance beam, floor, trampoline and vault posed few barriers, except for the constant smell of other people’s feet. Ballet had shown me leaping, arching and grace were all abilities my body possessed. Rolling down the hill at grandma’s house convinced me there was no landing harder or more painful than on a bee. Thankfully, there are no bees in gymnasiums. Stingers instead came in the form of fierce competition and bullying among the gymnasts. Standing in line for each station I’d watch them point and silently laugh at the girl whose underwear was always bigger than her leotard. 9 year olds assign rank more ruthlessly than corporate execs or PTA mothers. Waving her hand in front of her nose behind the underwear, the blonde ponytail was the unspoken all-around, fearless champion. I remember thinking of all the reasons she was good, better, unafraid, successful; the same worn out things I’ve always told myself about other people. The same worn out labels I’d allowed myself wear or hide behind. She toured each station with textbook precision, feigning encouragement to the rest of the team after every stuck dismount. Her elastic body breezed through routines as if she were programmed. I studied her looking for clues about how confidence might translate to never falling or failing because despite all the things I did well, most classes, for me, ended in a tearful panic with my right leg snaking the top bar for dear life. Will I ever do anything in my life without being mauled mercilessly by fear?

I’d practice on the lower bar first. My hands would start to sweat through the chalk as the coach’s palms would release my shaking torso. Jump. Hook. Swing. Reach. Now fly! Fall forward. Swing back and pull up! Up! UP! It was meant to be a fluid dance across uneven shores which required defying both physics and gravity. None of the terror that paralyzed me, perched across the top bar, had anything to do with grip or grit. New England dirt was in my DNA. The joyful freedom of letting myself go was the elusive part. It simply didn’t make sense to intentionally hurl myself towards the ground and hope to instinctively wrap my limbs around a springing rod to avoid crashing into a plastic sponge. What was the point of that? Was it supposed to be fun, risking an ankle or wrist for some fleeting moment of euphoria? YES! I did want it, desperately, but every time I could not move. The coach tried counting, mirroring the moves miles below, tough love and even mild shaming; people are missing their turn, you’ll never place in the all-around if you don’t get this, not again! Come on! With each passing week the anxiety mounted. It stopped mattering that I could back flip off a beam. I took to passing. The meet came and went with ribbons for routines which had always come easily. Had I even attempted to the conquer the bars? And once I did that, what would they expect of me next?

Before I went to jail I never had time to think.- Nelson Mandela

The list of rationalizations is beginning to exceed any list of prior offenses. That much I’m realizing. The what, why or how remain unsolved mysteries. I think I’m bargaining with God for permission to hold onto solid ground as passing clouds remind me the world never stops turning.